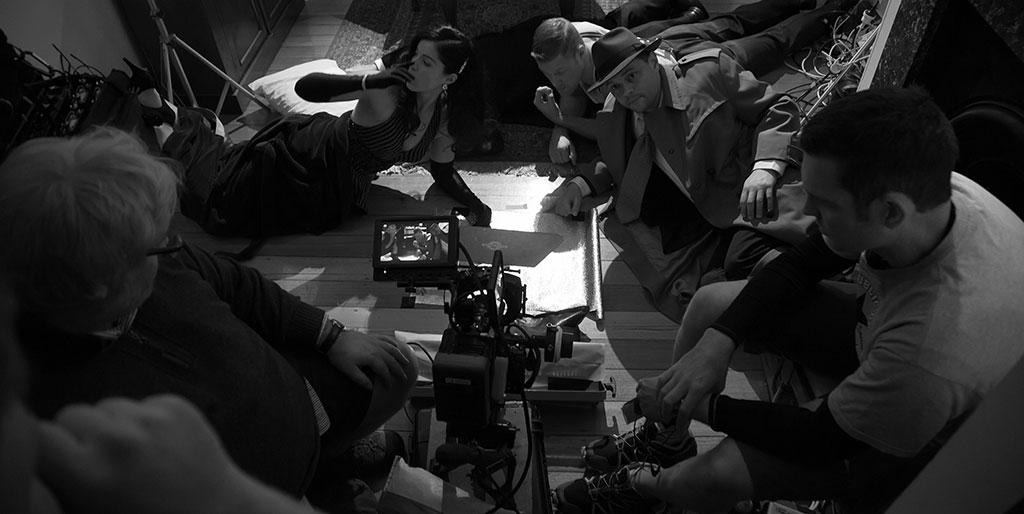 For the second series of Noirhouse, Sky Machine partnered up with Latitude Films, and were backed with funding from Screen Australia, Screen Tasmania, and the ABC.

Tim Logan, Nathan Spencer, and Shaun Wilson formed Sky Machine in 2008 to make cool stuff. Since then they’ve been churning out short films that have screened around the globe, creating the occasional ridiculous advertising campaign, and have developed a pile of original IP.

With over 30 years experience and a host of Feature, TV and Award Winning Advertising credits, Producer Fiona McConaghy formed Latitude Films in 2003. We pride ourselves on producing or facilitating exciting innovative high quality production and service.

When we don’t have him locked in a bunker writing scripts, he runs off and does stand-up comedy, in Hobart or San Francisco, or now Stockholm . We really have to get a better lock.

Fits shooting Noirhouse in between repeated viewings of Back to the Future. Proud single-malt advocate.

Our chiselled gumshoe by day, and co-creating more Noirhouse by night. You might wonder at which point he sleeps. He doesn’t.

To take us beyond the first three episodes, Fiona's stepped on board. After having dealt with outlaws like Michael Howe, Noiries should be no problem.

When she’s not completing a PhD, or running boot camp twice a day, or saving Tasmania from bushfire aftermath, she’s Nadia.

Once a rising talent in the Tasmanian comedy scene, now making himself known in the national one. Mick’s renowned for making pretty much any role funny.

Tasmanian born WAAPA graduate Sarah Wadsley is more than just a blonde with ambition. Now based in Sydney, Sarah’s an animal lover with a heart of gold, and part-time ninja.

Australia’s sweetheart, smashing his way through the comedy scene. Fresh from his run on Working Dog’s Utopia, and currently attached to about a billion other projects.

Somehow, Simon manages to crank through an alarming amount of shots in seven days, make them look beautiful, and keep us amused while he does so. Also mumbles something about espresso a lot.

If our characters didn’t look cool, they wouldn’t look noir. Drawing on her years of experience as a stylist, Liz crafted the stunning look of our cast, from their hair all the way down to their shoes.

Not only is Gus an art department guy, he builds everything from kitchens to museum installations. He made Noirhouse feel like our old school characters really lived there.

The glorious Paul could always be found sauntering about piecing together the bizarre needs of Noirhouse, letting nothing faze him.

Our long time collaborator and renowned composer Heath Brown returns again, with a beautiful and energetic score that drives Noirhouse.

It’s a particular kind of magic, keeping a mad rush of a shoot on schedule, without everyone feeling rushed. Matt’s the calm nerve centre of the complex beast that is a film set.

90% of filmmaking is making sure people and things are in the right places at the right times. It’s probably not 90%, if you want a more accurate number ask a production manager, they’ve probably got a spreadsheet on it.

Noirhouse is mostly moving pictures, but you would have seen a lot of beautiful stills around the place - like on this website. All thanks to Carlie.

Produced in association with the

Developed and produced with assistance from

Produced in association with